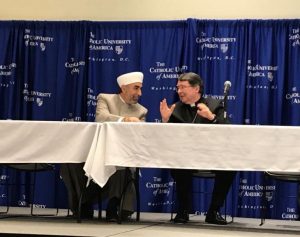 The Sultan & The Saint: Transformative Encounters for Peace and Reconciliation project was established by CECF & Al Basheer Seminary in April 2015 following a retreat that was coordinated by Root & Branches: Programs for Spiritual Growth.

In the year 1219, in the midst of the Fifth Crusade, St. Francis of Assisi travelled to meet with the Sultan of Egypt, Malik al-Kamil, a nephew of the great Muslim warrior Saladin. Francis was motivated by his opposition to the violence of the religious warfare raging in the Middle East, and thought he could end it if he could convert the Sultan to Christianity.  The Sultan, who was regarded by Coptic Christians as the most tolerant of Muslim rulers, respectfully received Francis as an expression of his own Muslim faith. Francis did not convert the Sultan, but was deeply affected by his encounter and left it with a new and revolutionary vision of Christians and Muslims living in harmony rather than conflict.

In our era, which is shaped by historical and political forces that would once again pit the Muslim and Christian worlds against each other, the transforming spiritual dynamic of the encounter between the Sultan and Francis is of supreme relevance. It is, in fact, a divine revelation that the faithful adherence to our religions can lead to a place of personal encounter which can transcend the history of distrust, grievance, misrepresentation and hostility to enable a transforming experience of an alternative possibility of living in harmony and respect. It is a transformation that can empower us to liberate our religions from those forces that would pervert them to serve violent political agendas, and to renew them as God wills to be a force for reconciliation and peace in the world.

Thus, the task of interfaith reconciliation and world healing is fundamentally a spiritual one. The ability of Islam and Christianity to contribute to the healing and peace of the world lies not in their ability to manipulate political, economic or diplomatic power, but in their ability to lead people into the experience of a transforming vision that allowed a Muslim ruler and a Christian saint to envision their world and the relationships of their peoples in a radically new way.

CECF considers “The Sultan & The Saint” a historical event from which to create this project to promote inter-faith, inter-spiritual and inter-cultural understanding and cooperation. It seems appropriate and necessary to offer another level of commitment and bonding to those who give themselves to this interfaith and intercultural mission as a personal spiritual commitment and sacred task.

CECF will work with Al Basheer Seminary, Interfaith Center & Institute to conduct a series of three programs in different parts of the world.  This S&S series will be followed by seminars and workshops both in the US and abroad to build on the budding relationships and experiences of those S&S transformational encounters.

Many local events have been held and the first national conference was conducted in the United States in Washington, DC.  On November 7, 2019 CECF was delighted to partner with the Catholic University of America (CUA), which hosted this first of three The Sultan & The Saint Conferences.